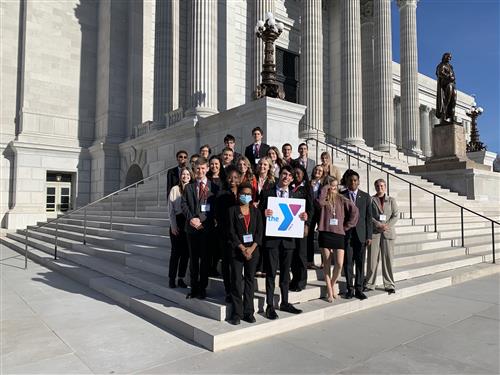 The Wentzville School District is proud to announce that three Timberland High School students have been elected as Presiding Officers after participating in the 73rd Annual Youth and Government Conference on Dec. 1-4 in Jefferson City. Additionally, four students served as Presiding Officers, and multiple students were selected to serve top positions next year. This year, 24 students were part of the Timberland delegation, the largest delegation to date from THS.

Youth and Government is designed to give students hands-on experience in government through legislative, media, and executive branches.

Junior Kaylie Lineback was elected youth governor, junior Bella Lutfiyya was elected speaker of the house, and junior Addie Plumb was elected media director. Students will develop these positions throughout the year, culminating as they serve as Presiding Officers at the 2022 Youth and Government (YAG) Clark Convention next year.

Senior Sebastian Delgado, junior Abi Jarman, and sophomore Danny Wilson were each awarded “Outstanding Statesperson” due to their well-thought-out speeches and ability to speak strongly both for and against bills, as well as ask informed questions. Justin Miller was named “Voice of the House” for his diligence in coordinating the paperwork associated with the House, as well as eloquent reading of bills and amendments.

This program is a YMCA-sponsored program based on the motto, “Democracy Must Be Learned by Each Generation” which involves approximately 1,200 Missouri youth in grades 8-12 in two student-driven conventions traditionally held in Jefferson City. Student participants emulate the roles of house representatives and senators, as well as fill the roles of reporters, lawyers, judges, and members of the executive branch.

Notice: All external links are intended for educational purposes only. Wentzville School District attempts to restrict external links to web sites of appropriate educational nature, and is not responsible for questionable or controversial content found through links external to this site.
Copyright © 2002-2022 Blackboard, Inc. All rights reserved.